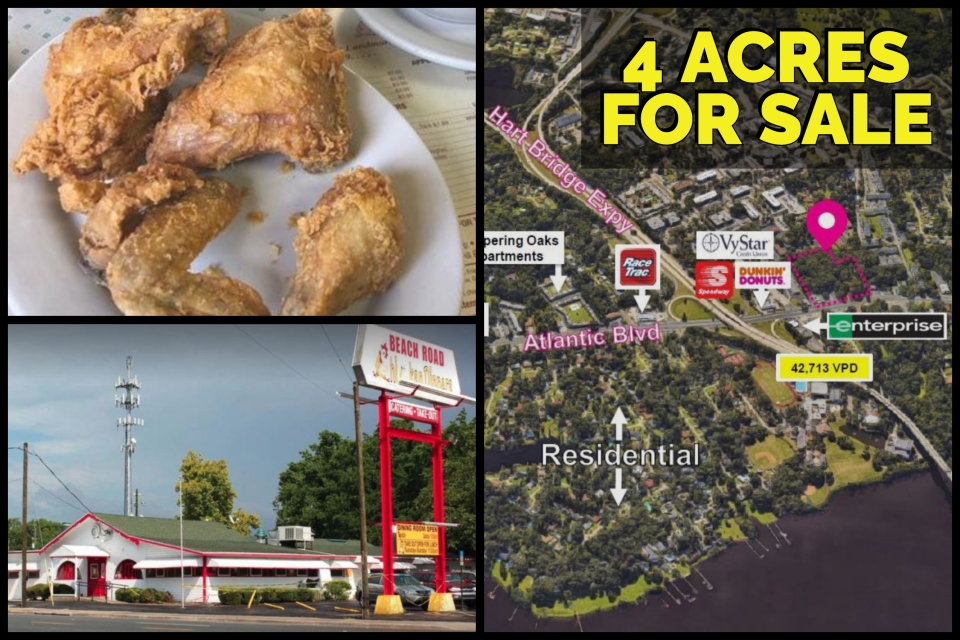 Now, the owners of the oldest continually operating restaurant in Jacksonville are looking to sell both the business and the 4 acres of land upon which it sits.

Ferger has been involved with the business since 1990, buying it from her brother, Vincent DeSalvo, who had bought it from founder Earl Majors in 1980.

The family has a history in the chicken business: Ferger’s father owned and franchised out a string of Mary Ann’s Golden Fried Chicken stores.

During their time owning Beach Road, Ferger and her husband and co-owner, Ken, have seen plenty of ups and downs, tightening their belts during the Great Recession and seeing a drop in customers while the Overland Bridge Replacement Project was underway.

Business is back to being good now, she said, but the couple, both in their 70s, have realized Beach Road needs some updating — and that’s not a project upon which they want to embark.

For Beach Road to succeed, Fergers said, it probably needs to get a beer and wine license and change up the menu.

“Millennials want to drink, they want variety,” she said. “It either has to change or it’s not going to be there.”

At the same time, the couple has also fielded interest in the land where the restaurant sits: about 4 acres, with two-thirds of the land being virgin forest.

The Fergers bought the property in 1998 for $400,000, according to city records. The 1.54 acres where the restaurant — built in 1924 — and its parking lot sits are zoned commercial; the other 2.46 acres are zoned medium density residential.

The Fergers put the property and business up for sale several months ago, but Gateway Business Advisors, which is working with the owners, recently stepped up efforts to attract potential buyers, including putting a bigger sign at the front of the property.

“The owners have been approached by investors many times over the years and decided this is a good time to gauge interest in the property,” broker Gary Hallett said.

Options include developing the rest of the property while keeping Beach Road operating at the site or moving the restaurant elsewhere, he added.

The best case, Ferber said, would be to find someone with restaurant experience who could keep creaming the peas and frying the chicken while transforming the rest of the property into commercial operations serving the 30,000 cars that pass by each day..

“I would hate to see the doors close,” Ferber said about Beach Road. “It’s been part of the DeSalvo family and Ferger family for 40 years now. It’s in our blood.”

Until they find that right buyer, she said, the city’s longest-operating restaurant will keep on operating.

“As long as we’re there and we’re selling chicken,” she said, “there’s no reason to close.”