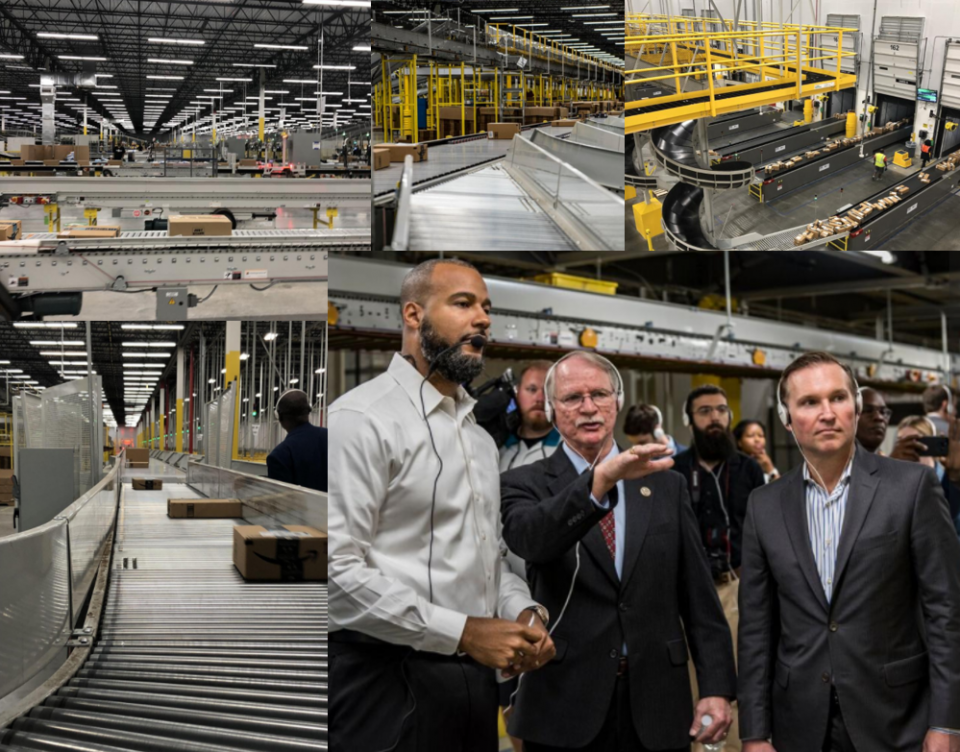 The Amazon fulfillment center in northwest Jacksonville has the capacity to send out 1 million packages each day. It hasn’t reached that point yet, but it has seen steady growth since it began operating in August.

Initial plans for the facility, located at 12900 Pecan Park Road, called for the creation of 1,500 jobs. It now employs more than 2,000 full-time workers. And during the past year, Amazon has slowly rolled out same-day delivery options for select zip codes in the area.

“Everyone at Amazon is thrilled to open our doors,” said Bernard Schmidt, the facility’s general manager, during a tour of the 855,000-square-foot building on Friday. Schmidt led local officials, business leaders and media past the building’s 12 miles of conveyor lines, 72 dock bay doors and hundreds of robotic units.

The facility specializes in the shipping of small items – anything under 25 pounds – while a second fulfillment center at Cecil Commerce Center handles the larger items.

Products are shipped in, scanned and placed on shelves that move around due to wheeled robotic units at the base of each storage container. When a customer orders an item, the computer system is able to immediately locate it, and the shelf storing the item is brought directly to a warehouse worker who unloads it. It is then packaged and placed on a conveyor belt to be given a shipping label and shipped away.

The first product shipped from the center was a Real Techniques Miracle Complexion Sponge.

Amazon, which began integrating robotics into its centers in 2014, currently has ten facilities in Florida. Permits filed with the city indicate Amazon also plans to build two additional facilities in Jacksonville, one on Bulls Bay Highway and another on Cabot Commerce Circle. Company representatives declined to comment on either project.

Also on Friday, Amazon announced it would be donating $25,000 to Renaissance Jax, a nonprofit that promotes science, engineering, technology and math education.

“We look forward to building a great relationship with the community in the years ahead,” Schmidt said.