Another Arlington property is targeted for redevelopment. 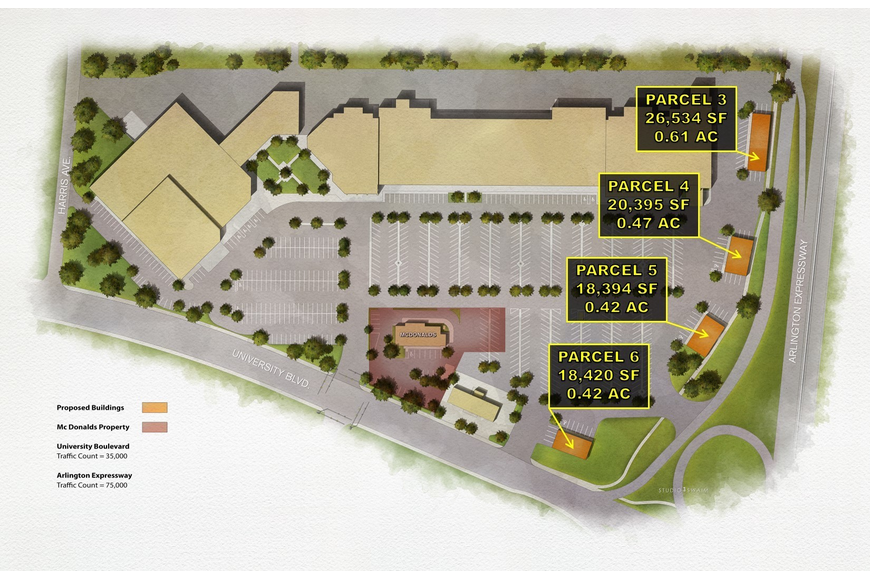 Another Arlington property is targeted for redevelopment.

The owners of Town & Country Shopping Center at 903 University Blvd. N. are listing four outparcels for sale along the southern end of the property facing Arlington Expressway.

Three of the parcels are on the side of the property where owners demolished a 21,700-square-foot building last summer that was built in 1954. The fourth is at the corner of University Boulevard and the expressway.

“I look at this as the entrance to Arlington and it deserves to have good tenants to bring life back to Arlington,” said Prime Realty Senior Vice President Matthew Clark.

Clark said parcels can be combined for a small strip center.

“There’s been great response from developers who work with quick-service retail or restaurant users … and they want to purchase the parcel and develop it for tenants they work with,” he said.

He envisions medical users such as dentists, urgent care centers and similar groups looking for sites like those at Town & Country.

Town & Country sits at northeast University Boulevard and the expressway. It was built between 1953 and 1979, with McDonald’s added in 1984, property records show.

It is part of the Renew Arlington Community Redevelopment Area, which the city hopes to assist with rejuvenation. Town & Country is next to the Bethelite property that also is targeted for development. Both are at near the eastern base of the Mathews Bridge and about 3 miles from Downtown.

“The owner is working on repositioning the asset,” Clark said, with roofing, façade work, painting and repaving and restriping the parking lot.

“There are some midsize nationals that are interested in the center if we can identify an anchor,” Clark said, noting that his priority has been filling the 50,000-square-foot anchor space that can be divided into two spaces.

“We’re talking to a few groups that have expressed interest in that space,” he said.

That space was occupied by Winn-Dixie. “I’d like to see some sort of grocer there, so that’s really who we’ve been targeting – the discount retailers and some smaller grocers,” he said, mentioning Rowe’s and Harveys as the type of supermarket in mind.

The property is owned by L.R.S. Co., led by Leonard and Benjamin Setzer, doing business as TSG Realty.

Read the full article in the Jacksonville Daily Record.