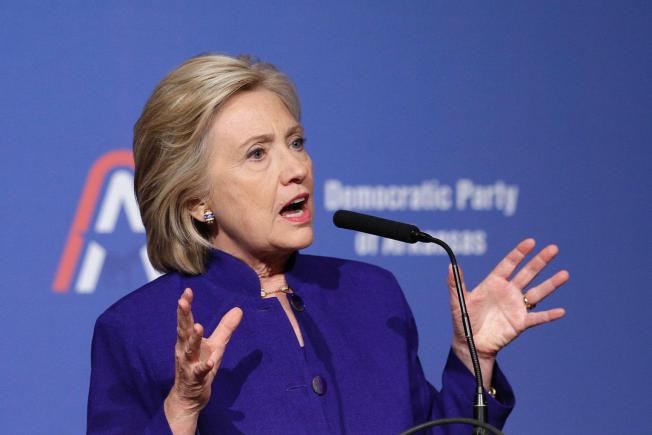 WASHINGTON (AP) — Hillary Rodham Clinton plans later this week to propose raising capital gains taxes for some investors, pivoting from a 2008 pledge not to increase the rate beyond 20 percent. The policy is part of a larger effort by her campaign to encourage greater focus on longer-term economic growth rather than more immediate gains for investors_a priority for the liberal Democrats she'll need in 2016. The new rates would be pegged to the duration of the investment, with short-term holdings taxed at a higher percentage.

In remarks on Facebook, Clinton also expanded on a promise to pursue criminal prosecution of bad actors on Wall Street, saying she would strengthen the power of government regulators and raise caps on compensation for financial whistleblowers. She also hinted at plans to modify the government fines corporations pay for wrongdoing so that the fees also target the bonuses of executives involved.
"Even though some institutions have paid fines and even admitted guilt, too often it seems like the people responsible get off with limited consequences (or none at all)," she said. "That's wrong and it has to change."

Clinton's tax proposal marks a shift from her 2008 campaign, when she promised not to raise capital gains rates higher than the 20 percent bracket established during her husband's administration. At the time, the rate was 15 percent — a result of the tax cuts championed by then-President George W. Bush.
"I wouldn't raise it above the 20 percent, if I raised it at all," Clinton said in an April 2008 debate.

Now, Clinton says a surge in companies focusing on shorter-term goals, like stock buybacks, rather than longer-range investments in employees and communities prompted her change in position. "The increase in short-termism has grown in urgency since 2008, and the urgency of our solutions has to match it," she said on Monday, in a question and answer session that Facebook hosted. Over his time in the White House, President Barack Obama has raised the capital gains rate for top earners to 23.8 percent — fulfilling a campaign promise to raise the tax.

Earlier this year, Obama proposed increasing the rate to 28 percent for the highest earners. While Clinton's proposal is still being finalized, her rate would likely be higher than Obama's plan for the shortest-held investments, according to a campaign official who spoke anonymously to discuss plans still being developed. Currently, gains on securities held for more than a year are taxed at the same rate as those held for decades. Many Democrats would like to see the rate go even higher, as part of a larger push by the party to crack down on what they see as Wall Street excess and to tackle income inequality.

Capital gains taxes disproportionally affect the wealthiest Americans. A study from the nonpartisan Tax Policy Center found that capital gains accounted for about half of the earnings of those making over $10 million_and just a fraction of those making less than $500,000.
Last month, Neera Tanden, the head of the liberal Center for American Progress and a prominent Clinton adviser, proposed a "sliding-scale" capital gains tax that would drop the rate charged the longer the security is held.

"Once an investor holds a share past the one-year mark, the tax code provides no incentives to maintain the position any longer," Tanden wrote, in a report co-authored by investment banker Blair Effron, co-founder of Centerview Partners. "A more flexible capital gains tax system could be a tool to incentivize more prudent behavior in equities markets."

Clinton's plan is part of a larger package aimed at tackling what she argues is too heavy an emphasis on quick corporate gains at the expense of workers and broader economic growth. In an economic address last week, Clinton decried what she termed the problem of "quarterly capitalism," saying businesses are paying too little attention to research and development, improving factories and cultivating talent.

"Now it's easy to try to cut costs by holding down or decreasing pay and other investments to inflate quarterly stock prices, but I would argue that's bad for business in the long run," she said. "Workers are assets. Investing in them pays off. Higher wages pay off. And training pays off."
Republicans knocked the plan, with Republican National Committee spokesman Michael Short saying Clinton is "proposing to grow Washington and the IRS by raising taxes."