Jacksonville, FL: A Few of the Reasons We Love Our City.

What is Great About Jax?!
September 2015 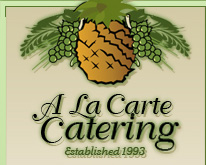 Matt About Jax –A La Carte in Jacksonville Beach- Jacksonville.com
Last week, I heard about a little restaurant that is a secret hot spot located in Jacksonville Beach. With a new healthier and delicious menu, I couldn’t wait to try A La Carte, a boutique-style restaurant.
As soon as I met Jennifer Lobrano, the owner of A La Carte, I felt like I had known her for years. “I love the business, and I love people,” she said as she described herself. At First, A La Carte was a catering business that Lobrano started 23 years ago. She opened the restaurant for lunch 14 years ago, and last May, she decided the menu needed a facelift and major change. This is where the healthier A La Carte was born. You won’t find any fried food on this menu, and everything sounds amazing.
Award Winning New England Clam Chowder, Lobster Bisque, Baked Haddock Fish Sandwich with a Lemon Basil Butter Sauce and a Flank Steak Sandwich with Boursin Cheese are just a few of the items you can choose from for lunch. All of the sandwiches are served with Cape Cod Potato Chips, and there are gluten-free sandwiches offered as well. The cooking is unique at A La Carte, with Jennifer keeping the recipes a secret. “Everyone is after my clam chowder recipe but, no, they can’t have it,” she said with a smile.Jennifer and A La Carte remind me again how much I love my job.
Just look for the yellow seaside cottage and enjoy one of Jacksonville Beaches best-kept secrets.
http://jacksonville.com/entertainment/food-and-dining/2015-09-02/story/matt-about-jax-la-carte-jacksonville-beach

Jacksonville company recognized for building Top Power Plant – Jensen Werley
APR Energy PLC (LSE: APR), a Jacksonville-based global power company, has been recognized for building one of the top gas power plants by Power magazine.
APR Energy's 102-megawatt Kyaukse project in Myanmar was installed in just 90 days, and is one of the largest thermal plants in the country, according to a company statement. The plant, fueled by local natural gas resources, provides power to 6 million people, in a country where nearly 42 million people don't have access to electricity.
“We are extremely honored to be named a Top Plants Award winner by Power magazine. Myanmar is a fast-growing economy with tremendous potential,” Clive Turton, managing director of APR Energy’s Asia Pacific region, said in a statement. “Our plant in Kyaukse provides the country access to reliable electricity, helping to fill a critical power gap where three-quarters of the population lack access to reliable electricity.”
Turton added that the plant was built by APR Energy employees and contractors, many of whom were local. APR Energy specializes in quickly building power stations in countries that do not have electricity infrastructure.
The contract for the Myanmar plant, signed in February 2014, marks the first agreement between the government of Myanmar and a U.S.-based company for power generation since sanctions were lifted two years ago.
http://www.bizjournals.com/jacksonville/news/2015/09/01/jacksonville-company-recognized-for-building-top.html

FSCJ named a 'best' community college in recent ranking – Alexa Epitropoulos
Local community college Florida State College at Jacksonville is among the best in the country, according to a recent WalletHub ranking. FSCJ came in at No. 84 on the list of best and worst community colleges, tying with Shoreline Community College in Washington.
FSCJ performed the best in the education outcomes and the career outcomes categories, ranking at No. 59 and No. 85 respectively. The Jacksonville community college was joined by several other Florida institutions, including North Florida Community College in Madison, Florida, which was ranked at No. 1 on the list. Chipola College and Broward College were also in the top 20.
The study cited community colleges as increasing in popularity and reputation, due to their affordability and flexibility.
http://www.bizjournals.com/jacksonville/blog/morning-edition/2015/09/fscj-named-a-bestcommunity-college-in-recent.html