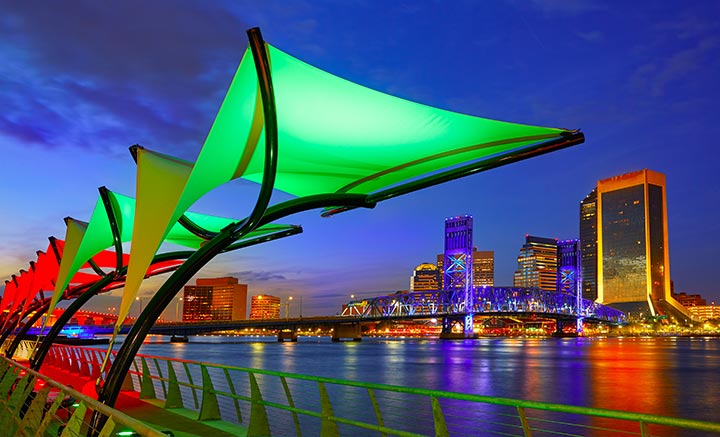 Jacksonville, FL may not be front of mind when investors think about defensive, tight markets that keep a tight lid on new developments. However, that might be changing.

The River City, along with many Southern boom towns, gained a reputation for overbuilding in most economic expansions. But now, with apartment rent growth shooting higher, Jacksonville is starting to show signs of undersupply and shrinking affordability.

Despite a massive river running through downtown and a beach flanking its eastern border, Jacksonville surprisingly lacks meaningful land constraints and is the nation’s largest metro by incorporated area.

After feeling some of the worst effects of the last housing bust, Jacksonville has been slow to bring new product to market. Coupled with historic population and income growth, Jacksonville’s apartment rents have been a top-three gainer in the country for metros of at least a million inhabitants.

Employment growth in high-income financial activities and professional services has ballooned this cycle, as multinational banks have found Jacksonville as a low-cost service center for back- office, and increasingly, client-facing roles. Both sectors are more than 10 percent larger than highs reached at the previous peak and have collectively added more than 4,500 new jobs over the past 12 months. But the metro only delivered 1,700 apartments last year.

This expanding cohort of well-paid new hires has pushed Jacksonville’s income growth above 5 percent in each of the past two years. More widely, the metro has more than doubled the national population growth this cycle, thanks in part to a booming port and trade sector.

The double whammy of higher-than-anticipated jobs and accelerating wages has left developers scrambling to deliver units for this affluent, young crowd.

With the 20-34 age group growing at rates double the national average, Jacksonville has been given a prime renting cohort with money to spend. Even with these job fundamentals, Jacksonville failed to meet apartment demand until 2016. Today, vacancy is roughly a third of its long term average.

The backlog may get worse. Jacksonville will only deliver roughly 2,500 units this year, putting it on par with the amount delivered in 2007, when the metro had 240,000 fewer citizens. With improvements paying off at the Port of Jacksonville, and newly loosened banking regulations, Jacksonville is not likely to see a jobs slowdown any time soon.

As capital providers and developers have showed restraint, a more mature Jacksonville might finally get the respect it believes it deserves.